This devblog is a week late – and for a good reason! After (and only after) a stressful week of work, on friday night, my computer shutoff while I was folding some laundry in my room. I left it until morning when I troubleshooted, took it apart, and discerned the problem as the motherboard being shot. There was no power, no lights, and the PSU was working effectively when I tested that. Neither the CMOS nor the CMOS battery inspections returned positively. I needed a new board.

In a poorly considered but (barely) affordable financial decision, I quickly researched a cheap set of replacement parts and dropped the cash to get them. It is only now I am able to access my progress, verify that nothing was lost, and put together a dev blog for what even happened that week.

So what do I have to show for week 3 after such an extended period of anticipation?  Well, I have the rifle. It’s just one weapon, but I learned a lot about both myself and Blender in the process, which is why it was such a productive and stressful week.

Wheras the other two weapons were hastily sketched and then laboriously animated as I learned the tools, I went into the rifle already knowing what I wanted visually, which sort of affected my mindset on the whole thing. Where I could easily make a couple boxes, animate a few seconds of placeholder, and call it a day (it would honestly only take about an hour to get a full set done), I, for whatever reason, couldn’t shake the feeling that I couldn’t stop myself there, but that if I were in blender with an idea of what I wanted, I might as well make it and animate it out as best I can. So that I did. 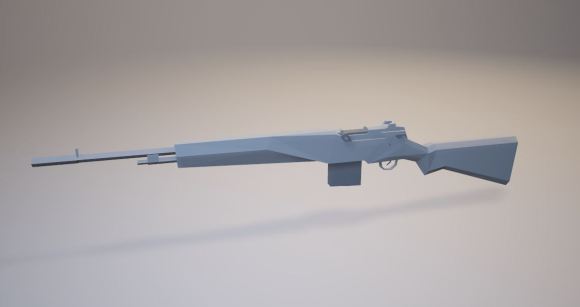 The rifle is planned to be found by the player at an altar about 1/3 of the way through the game, representing a sudden and violent push into the blood-soaked, industrial nightmare of the 19-20th century’s infamous wars. The capability and visual design, then, had to mirror the impression of weapons during this time, and so a semi-automatic rifle styled after the Springfield M1A, both a visually appealing and relatively representative choice.

It turned out swell, but the stressful part of the week was ironing out all the minor imperfections that I really shouldn’t have been focusing on. Seen above in the gif, the hands will float around their target destinations, the spread is wrong, the FOV is wrong, and the bullet remains in the cartridge when flying out of the gun. The hands part alone took a lot of researching into the weird kinks of blender to figure out what was wrong (long story short, animation compression and simplification when exporting). These are things I could have ignored (like I did for the spear and the knife) while getting out other features, but they were things that had to be done eventually.

Well “Next Week” is already over. As of time of writing, it’s January 12th, the friday of what should have been my last week of this weird project. Instead of working 3 weeks, excluding Christmas, I’ve worked only two, excluding Christmas and this one where my computer broke. All I really accomplished was some brainstorming, a few sketches, a bit of level design and narrative ideas, and a fair amount of gameplay into Breath of the Wild while I waited for my parts to ship.

I plan on at least delivering a fourth week update, even if it takes place over a weird amount of time. On the day (night) I’m writing this, I’ve been working a full day, and over the next, first week of the semester (but maybe longer), I’ll probably have time to make another blog’s post worth of content to write about. I’ll try to keep that up probably indefinitely, but after the next post it could start being a while between updates, although I’ll try to do it more than my big drought recently.

If there’s one unmovable fact of life I’ve been enwizened to from my experiment this break, it’s that sometimes when things are going great, life just kind of lays into you and doesn’t stop for a while. It can only really improve from here though.